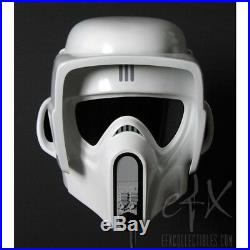 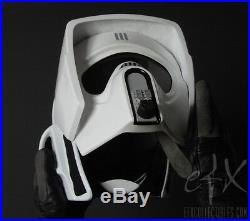 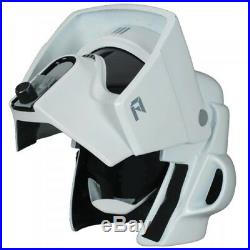 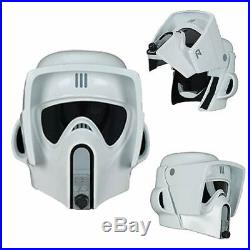 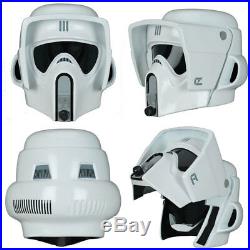 Scout Trooper Limited Edition Helmet. Our new officially licensed, Limited Edition (Biker) Scout Trooper Helmet will be one of the most accurate reproduction of this incredible helmet produced to date. It has the all the pedigree of our Legend Edition line since the master molds were made from the original master tools ILM used to make the screen-used helmets.

As with the Legend Edition, there is no digital scanning or 3D modeling used, only original parts and tooling. We even used an original decal sheet from ILM to make our markings and symbols that are seen on the helmet! You can call this helmet "Legend - Light"!

This original helmets were made in vacuum formed ABS. This EFX Limited Edition helmet is made in high quality, hand-laid fiberglass. The Imperial Scout Troopers were a specially trained garrison of the Stormtroopers. The signature piece of equipment utilized by the Scout Troopers was the 74-Z Speeder Bike, thus earning them the nickname Biker Scouts. The Scout Troopers were first seen in the Star Wars saga in Episode VI: Return of the Jedi on the planet of Endor where the uncompleted, but fully functional, new Death Stars shield generator was located.

A team of rebels that included Princess Leia, Han Solo, Chewbacca, C-3PO and R2-D2 with the help of the Ewoks, defeated the scout troopers and stormtrooper and destroyed the shield generator, allowing Lando Calrissian and the X-wing pilot to once again destroy the empire's mighty Death Star. The Biker Scout helmet and armor was designed by Nilos Rodis-Jamero. As with many of the imperial helmets made not only for this production, but for the entire original trilogy, this helmet was made in vacuum formed ABS plastic. The beautiful master patterns were a piece of art in themselves, as they were made in wood, like the way toys patterns were made back before the digital age. The symbols and markings on the helmet were hand applied decals.

You can see the lineage of these elements to the original stormtrooper helmets first seen in Star Wars Episode IV: A New Hope. This helmet had the unique feature of the pivoting visor, even though you never saw the helmet with the visor up. The unique symbol seen on the side of the visor was designed by ILMs Pete Ronzani. The symbol was actually a logo he designed for his own personal business card.

If you turn the symbol clockwise 90°, you can see his initials P A R! The EFX master patterns were made from these original wood patterns, thus there was no digital scanning or 3D modeling used to produce this helmet. Thus, this is the most accurate reproduction of the Scout Trooper helmet possible. We even had an original decal sheet of the symbols and markings to produce our decals. THESE ARE HERE NOW - THE WAIT IS OVER!

Check out our other Auctions for the latest Movie Prop Replicas. The item "EFX Star Wars Scout Trooper HELMET Return of the Jedi Limited Edition IN STOCK" is in sale since Friday, February 23, 2018. This item is in the category "Collectibles\Science Fiction & Horror\Star Wars Collectibles\Other Star Wars Collectibles". The seller is "billanddeb" and is located in Monroe, Connecticut.